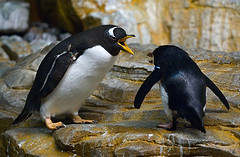 Winter driving season is here – and the Shift Into Winter campaign reminds you to plan ahead and know the conditions before you go.

Commercial vehicles must carry chains between October 1 and March 31 – and passenger vehicles must have “mountain snowflake” or “mud and snow” tires with at least 3.5 mm tread as winter tires, according to this information from TranBC: Shift into Winter: The Inside Scoop on Winter Tires and Chains.

I contacted the Ministry of Transportation and Infrastructure to clarify if there are any roads that require passenger (non-commercial) vehicles to use chains. For the most part, it is optional (but a good idea) for passenger vehicles to carry chains.

“The Ministry can require chains on any vehicle through the use of signs,” said Jennifer Hardy, the Ministry’s Traffic Engineer. “However, the only location that I am aware of where this is currently in place is on the road to Mount Washington Ski Resort.”

Here’s a story from a professional driver who helped keep two people safe from the road conditions (and possibly each other).

One morning while plowing snow on Heckman Pass I noticed a small car had arrived at the chain-up area and the male occupant was removing tire chains from the trunk. Not thinking much of the situation I proceeded to make another pass, plowing to the top. I plowed to the top approximately 18 km, then turned around and headed back towards the bottom again, expecting to meet the small car on my way down.

While arriving back near the chain-up area at the bottom I noticed the small car had become stuck, was blocking traffic, and the two occupants – man and wife – appeared to be in quite a heated debate near the rear of the car. I approached cautiously noticing that the gentleman had the tire chain instructions out and was reading them to his wife while she shook her head and repeatedly called the man an idiot.

As I approached I interrupted the argument by asking if I could be of assistance. The wife turned to me and said: ‘Can you please tell my idiot husband that he has chained up the rear wheels of our front wheel drive car and that is why I am stuck?'”

The man then turned the tire chain instructions to me and said: ‘I am following the instructions and my idiot wife has purchased the wrong tire chains.'”

Trying to ease some tension I suggested that I could help remove the chains from the rear and we could put them on the front and give that a try. After some persuasion I convinced the man that these particular instructions were generic and that the chains indeed needed to be on the front wheels for this particular vehicle to climb the pass.

The two continued to utter insults at each other while I removed the chains and reinstalled them on the front. I interrupted again once finished, then said: ‘Well – should be good to go now,’ but by this time the argument had escalated to the point that the wife was refusing to drive the car let alone be in the car with her husband.

Trying once again to defuse the situation I offered to take one of the occupants while the other followed in the car, and that I would assist in the removal of the chains at the top of the pass. The two agreed and we proceeded to the top. Once at the top the man removed the chains while his wife sat in the car. At this point I wished the two safe travels and left them to continue on their own.

Ha! Notice the wife was right… 😉