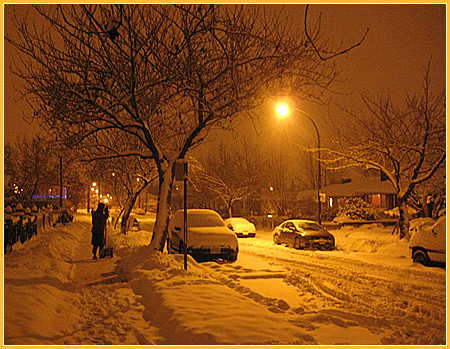 I’ll admit it. I’m one of those Vancouver people who’s scared to drive in the snow. Sometimes people from other regions and provinces make fun of us, but I don’t care. When it snows, I walk and use transit.

Yet depending on your lifestyle, that option may not work. If you plan to drive in the snow – and feel apprehensive – check out Shift Into Winter.

“Install winter tires” is the first tip I saw there. This is interesting because lots of people – like my friend Coco Bikadoroff – have been talking about tires on Facebook lately.

Coco posted this status update: “It’s my first year with snow tires and I gotta say…….best investment I’ve made in YEARS! Seriously folks, start savin’ your pennies for next year…..it’s nice to not drive white knuckled in winter.”

It was a record snowfall in Vancouver on Dec. 21, 2008 when more than 20 centimetres fell. Coco wants to avoid any repeats of what happened back then, when she had all-weather tires.

“I got horribly stuck several times and basically I was scared to drive in the snow,” she said. “It’s common sense finally kicking in. All-weathers are not snow tires. People have to know that.”

She bought four Arctic Claw tires (I love that name!) from her friend at Big-O Tires on Kingsway. She describes the first morning she drove her son to school in the snow.

“It was like there wasn’t any snow on the ground,” she said. “My son said: ‘Wow, it’s like any other day! You’re not slipping and sliding!’”

More safety and less hassle sound like good reasons to invest in snow tires. As for me, I’ll stay parked.

WorkSafeBC created the Shift Into Winter project with a group of dedicated traffic safety advocates:

1 thought on “Help for the snowphobic”