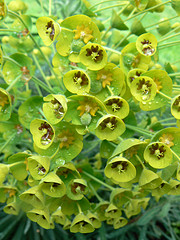 “Whoa! Did you touch some giant hogweed?” I asked my friend the landscaper when she showed me some nasty-looking blisters on her upper arm recently.

“No – that’s what everyone says!” she replied, with a roll of her eyes. “It was euphorbia.”

Its sap can cause blisters, long-lasting scars, and temporary or permanent blindness if it touches your eyes. The plant can grow two to five metres and each one can produce 100,000 seeds that can be viable in the soil for up to 10 years. Giant hogweed usually grows in creeks, ditches, and vacant lots, but this year crews have seen them spread to popular walking trails.

“So as soon as you have a plant that’s gone to seed and drops its seed, you’re going to have a problem for many years to come,” Grenz told CBC. “The giant plants can grow to between two and five metres tall and due to their poisonous nature, they are extremely difficult to remove.”

This story in The Tri-Cities NOW quotes Larry Englund, urban forestry manager with the City of Coquitlam.

“It’s phototoxic, so you get the sap on you, then that part of your skin that’s got the sap on it, light hits and that activates the toxin and you get burned,” he said.

But there are other plants to watch out for too – like euphorbia. It’s listed along with spurge laurel and giant hogweed in Health and Safety for Landscaping and Lawn Maintenance Companies. This publication recommends the following precautions when working near toxic plants:

My friend, a self-employed landscaper who works alone, says she will keep her skin covered for the rest of the summer. In future, she will be more aware – after this itchy and uncomfortable lesson of life.

For more information, see Toxic Plant Warnings from WorkSafeBC and this video: