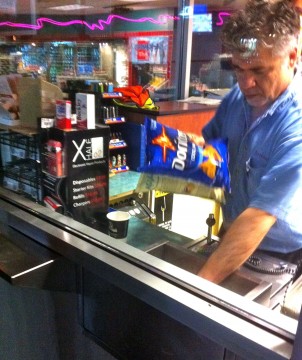 Here’s a good example of what these workers are up against. I heard it from a late-night delivery driver who fuels his work truck at least four times a week in the middle of the night at gas stations with convenience stores.

“I was grabbing a coffee at 3:30 am this morning when a drunk guy was causing grief for the poor staff. No plexiglass for those minimum-wage earners, just a three-foot-high counter and people like me who told the guy to move along,” he said.

But imagine how it would be for a lone worker to deal with that situation. Here in B.C., safety for this group of workers is at issue and a “Working Alone” regulation, 4.22.1 Late night retail safety procedures and requirements, has been amended twice in 2012. The original regulation required employers to do the following:

(i) ensure that the worker is physically separated from the public by a locked door or barrier that prevents physical contact with or access to the worker;

Most of the time, this option may work well, but when I think about some of the rougher neighbourhoods, I feel worried for the late-night workers. Some are strongly opposed to the amendments.

“This is a huge setback for some of the most vulnerable and lowest-paid workers in the province,” said Jim Sinclair, BC Fed president, according to a news release.

“In response to suggestions the new standards will still protect workers, Sinclair said that the best late night workers could hope for is that when they are robbed violently, they are lucky enough to survive and have their assault caught on video and their employer notified,” the release reads.

Retail and service workers can be “vulnerable to the daily fallout from theft, gang violence, homelessness, and mental health and addiction problems,” according to WorkSafeBC officer Marty Glendinning, who talks about safety for workers in malls throughout Metro Vancouver in the article “Trouble in Store,” in the Jul/Aug 2012 issue of WorkSafe Magazine.

The delivery driver describes what he sees.

“All the stations I visit are staffed by one person, who is locked in the store and all transactions are done through a pass-through drawer,” he said. “But the clerks at some stations make judgement calls and let certain people, myself for instance, into the store, so their safety at that point is purely dependent on their judgement, and luck. I’m driving a delivery truck, wearing a uniform and have visible company ID, which makes me a pretty safe bet, but depending on who else they let in, their safety could be compromised.”

Personally, I’d rather have a physical barricade between me and the public if I were working late-night retail. If you or anyone you know has experience with late-night retail – do tell. What do you think, based on what you’ve seen?