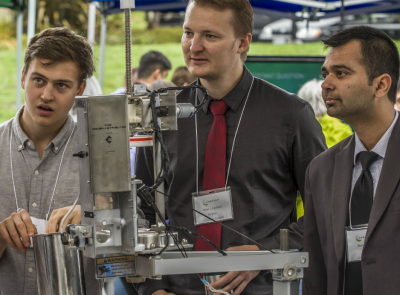 The Cookie Monster would definitely be pleased with this!

It’s a prototype machine that deposits cookie batter onto trays, designed by students in Camosun College’s Mechanical Engineering Technology program. They created it in collaboration with the owners of Victoria’s Origin Bakery, which I read about in Nov/Dec 2015 WorkSafe Magazine.

I wanted to find out more, so I got in touch with Jeff Stephen, Lead Projects instructor in Camosun’s Mechanical Engineering program. He explained that it was made by second-year students in the Capstone Project course in which they design, manufacture, test, and present a unique device relating to the discipline of mechanical engineering.

Jeff first heard about Origin’s idea through Camosun’s Applied Research and Innovations department. He met with the bakery owners and discussed the current issues of cookie dough handling, and after tossing around a few “wild and crazy” ideas, he saw realistic potential and brought it forward as a project for students. In addition to their ideas, the bakery supplied all materials used for the prototype.

Jeff said the bakers had been using a mini ice cream scoop to dispense each dough portion onto trays.

“Using this a few dozen times is definitely hard on the wrist, but using it 300 times daily, as they currently do, leads to repetitive strain injury,” Jeff says. “Our device will dispense the dough automatically, avoiding operator strain and injury.”

The new dough dispenser can be produced for less than $1,000, making it more affordable for smaller businesses that aren’t in the position to spend $25,000+ for industrial machines.

I asked Jeff if he’s seen other student projects related to workplace safety.

“Workplace safety is a consideration in most projects, and sometimes it’s even the main consideration,” he says. “Last year we also designed a crimping device used for battery cables that removes the operator’s fingers from being near a dangerous pinch point.”

Other Camosun projects include:

* An off-grid produce washer that increases usability for local farmers
* A non-electric, human-powered elevator for a local paraplegic resident
* A bottle filler for a local cosmetics company that also removes repetitive strain injury

Congratulations to Jeff and his team of students – and also to Origin Bakery. It’s exciting to see great ideas come to life with the right team to guide them along.