The Actsafe team gave out free coffee and talked about safety orientations with workers at studios and workplaces during its 2019 Injury Prevention Week. 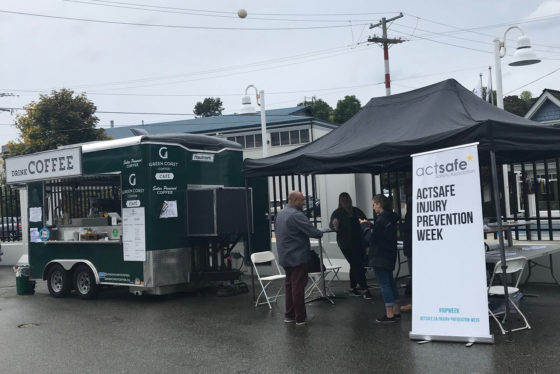 As part of Actsafe’s Injury Prevention (AIP) Week, a team from Actsafe used a travelling “safety café” to hand out coffee and talk about safety with workers around Metro Vancouver. While handing out more than 500 cups of coffee at five studios and worksites, the team chatted with workers about the 2019 theme for AIP Week, “Prevention Through Orientation.”

Anand Kanna, Actsafe’s manager of Motion Picture Programs & Services, and his team started their conversations with workers by asking them if they’d had a safety orientation today.

Like all other employers in B.C., those in the arts and entertainment industries are responsible for providing safety orientation and training for workers. (Read more about these requirements in Training & orienting workers from WorkSafeBC.)

Anand described to me how each production has its own way of delivering safety orientations. Some give a safety talk at the beginning of the day, then each of their departments orients its own workers and collects signatures on sign-up sheets. Others send the information to workers online and collect digital replies that show workers have received and read it.

Employers in the television and motion picture industries face unique challenges when it comes to safety orientations since worksites can change every day — sometimes multiple times in one day.

“You could start working on set in the forests of North Vancouver then go to an apartment building in the middle of Burnaby,” he says. “Somebody could be the member of a production for many months working with the same crew but every time they film on location, it’s a new worksite.”

During AIP Week, Actsafe shared lots of content related to the Week’s theme through its social media channels. Visit its website to find these resources, which include videos, checklists, and toolbox talks.

Also, mark September 21–25 on your calendars for next year’s AIP Week. The theme for 2020 will be “MIND Your Health: Mental Health Awareness.”