Shawn Michaels has seen many chainsaw injuries during his work life. Now, he’s designing a safety jacket that protects arborists against chainsaw blades. 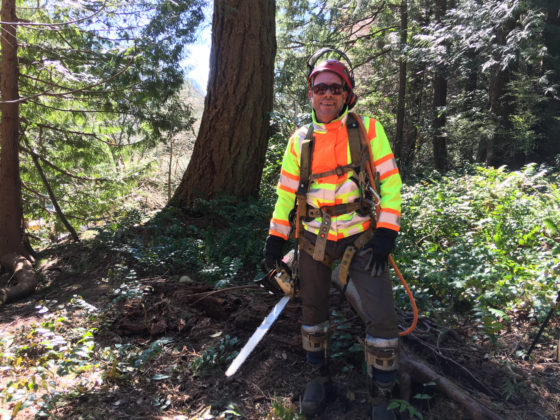 “I think this is likely the safest jacket on the planet,” says Shawn Michaels, an arborist and technical apparel student at Kwantlen Polytechnic University (KPU). He’s referring to the Kevlar safety jacket he designed to protect arborists while they use chainsaws.

From injuries to inspiration

At 16, Shawn was struck in the leg by a coworker’s chainsaw while they were cutting down trees. He needed 18 stitches, but if it hadn’t been for the safety pants he was wearing, his injuries could have been much worse.

Shawn has also seen many other workers injured, mostly when he was young. “It was quite impactful,” he says. “I was really young and when you witness things like that, it stays with you.”

Eventually Shawn started working as an urban arborist. Arborists often use chainsaws when they are 50 feet up a tree, which is much different than using a chainsaw on the ground. Says Shawn: “When I started climbing, I felt like my upper body was more vulnerable if there were any mistakes or errors. Rescue is also more complicated when you are so high off the ground.”

Shawn wanted a jacket that offered as much protection as safety pants — but it didn’t yet exist. So he designed his own, then enrolled in the Technical Apparel Design program in the Wilson School of Design at Kwantlen Polytechnic University (KPU) to develop it further.

At first, Shawn was focused on protecting himself and making sure he made it home to his family. But then he realized that everyone else felt that need and desire, too.

“All the little fears and worries that I have, everyone else also has,” Shawn says. “Now the idea of building equipment that saves people’s lives is central to my thoughts.”

In 2018, Shawn’s supervisor at KPU, Dr. Dan Robinson, helped him get an Innovation at Work grant from WorkSafeBC to support the development of his jacket design. When we spoke, Shawn was preparing samples of his jacket to send for destructive testing at the Textile Industry Research Association (AITEX) in Spain. Shawn and his team will use the research to determine how much protective Kevlar it takes to stop the blades of a chainsaw. (They need to ensure the design meets ISO standard 11393-6:2018.)

Read more about Shawn’s work in the March/April 2019 issue of WorkSafe Magazine.

Thanks to Shawn for sharing his story.