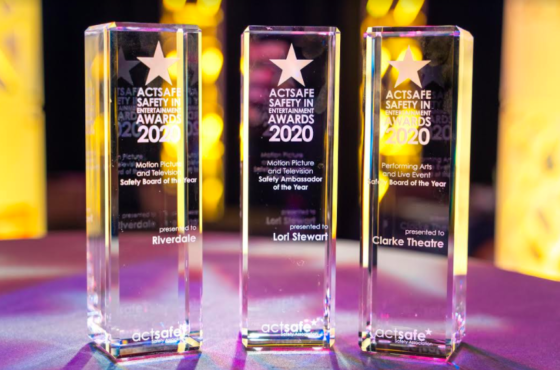 The health and safety organization for B.C.’s arts and entertainment industry is putting the spotlight on some of its greatest safety stars.

Actsafe Safety Association announced the winners of its inaugural Safety in Entertainment Awards in March 2020. One of them is Vancouver stunt performer Lori Stewart, who is also the health and safety advocate for the Union of B.C. Performers.

Lori was named the Motion Picture and Television Safety Ambassador of the Year for her work to promote concussion awareness in her industry. (Read more about Lori’s story in this CBC article from June 2019.)

According to Actsafe’s Safety Scene, which focusses on concussion in its Spring 2020 issue, those in the performing arts and entertainment industries work in “complex, high-pressure work environments.” And they are involved in activities every day that put them at risk for sustaining concussions.

“Our award recognizes the effort Lori has put in to ensure the industry takes up concussion as a serious issue,” says Manu Nellutla, Actsafe’s executive director. “She started the conversation and influenced the industry.”

Lori worked in collaboration with Actsafe and Philippe Saucier at SportMedBC to create the Concussion Awareness, Response, and Management for the Motion Picture, Film & Live Performance Industries pathway. It’s an industry-specific safety protocol for responding to potential concussion-causing incidents, adapted from the Concussion Awareness Training Tool (CATT) developed by Dr. Shelina Babul of the BC Injury Research and Prevention Unit.

Manu says that instead of looking at lagging indicators — like injury rates and number of days lost — it’s important to focus on solutions and opportunities. He says: “We want to recognize and celebrate individuals who are working to improve safety and influence industry.”

Actsafe gave a Special Recognition Award to Sue Palladino and the safety department of Warner Bros. (WB) for their continuous support toward workplace health and safety. Thanks to Sue’s influence, Motion Picture Safety for Supervisors, a free Actsafe workshop, is now mandatory at all WB productions in B.C.