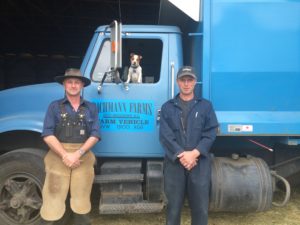 Joe and Andy Bachmann won the 2016 Champion of Agriculture Award for putting safety first on their Pitt Meadows dairy farm.

AgSafe presented the award to Bachmann Farms at the BC Agriculture Council Agri-Food Industry Gala on January 25, after a year-long safety awareness campaign on social media. I wrote about it in my post Do you know an agriculture safety champion?.

The purpose of the campaign was to highlight the efforts of those who are making safety a priority on large or small farms, ranches, vineyards, or retail garden centres. People took part by sharing safety tips with photos of themselves on Twitter, Instagram, or Facebook using the hashtag #AgSafetyChamp.

“We received a lot good safety tips from all sectors, and people of all ages who had different responsibilities in their workplace. The campaign was also an opportunity for people to ask us questions about workplace safety,” says Wendy Bennett, AgSafe’s executive director.

Altogether, people shared 138 tips, and each person was entered into a monthly draw for a $50 gas card. The Bachmann brothers won the grand prize for their tip “Every worker and contractor that comes on site must attend a safety meeting,” and for their exceptional commitment to safety.

“They have such a good attitude about it. They genuinely care and it’s amazing,” she says. “In January, every year, they’d call us out and get us to make a list and then they just do whatever’s on the list. They’re 100 percent open. They haven’t said no to anything.”

Congratulations to the Bachmann brothers and thanks to AgSafe for all the details.