Bears and other wildlife can pose a serious threat to workers in wilderness areas. Employers need to assess the risk and develop an emergency response plan. 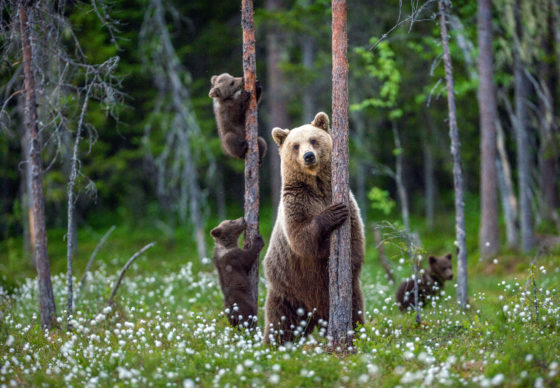 In the summer of 2018, a hunting guide in a remote part of Northern B.C encountered a grizzly bear with two cubs. The adult bear charged and attacked the guide, who dropped to the ground and tried to remain still. The bear clawed and bit the guide, who fought back by hitting it in the face until it retreated.

Even though this type of attack is very rare, it’s still important for employers and workers to be prepared for potential bear encounters.

“Bears can be very unpredictable. They could be just eating and doing their own thing, then all of a sudden you’ve got them running right at you,” says Budd Phillips, a WorkSafeBC manager of Prevention Field Services based in Fort St. John.

Assessing and planning for the risk of wildlife encounters

Budd adds that employers and workers should consider more than just bears when working in bear country.

“There are much deadlier animals out there that we often don’t think of,” he says. “A lot more people die from anaphylactic shock from biting insects every year than from any sort of an attack from a grizzly bear, black bear, or cougar.”

People can develop allergies to bees and wasps at any time, Budd says, so it’s important that they have access to an epi-pen or antihistamine. Employers need to know what types of hazardous animals workers may encounter on their worksites — from large predatory mammals down to insects and rodents.

Says Budd: “We would expect employers to have an emergency response plan, which begins with a risk assessment. This involves asking questions like: What’s your management response if a worker has an anaphylactic shock reaction because of an insect bite? If a bear attacks a worker, what’s your response plan? How are you going to neutralize the bear to try and save the person?”

Here are a few important things to keep in mind for avoiding bear and cougar encounters (from WorkSafeBC’s Wildlife & insects webpage):