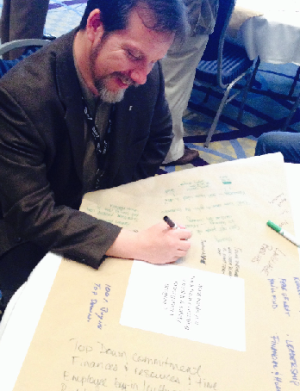 They tried something new at the BC Safety Charter Roundtable this year. It’s known as the World Café and its aim is to get people talking and recording ideas that will be shared further.

Industry leaders were divided into six groups that moved through the room and wrote their answers on big sheets of paper at the annual event held April 30 in Burnaby. One question, for example, was “What holds you back from executing a health and safety management program?”

Buck Page, safety manager for Conair, says this format was an interesting tool for generating discussion amongst a diverse group of participants.

“The shared ideas and feedback meant that everyone had a voice, and participants could see where there was commonality or differences with others on a particular topic,” Buck said. “I’m looking forward to the follow-up and feedback from the facilitators, and to using some of the ideas generated.”

The FIOSA-MIOSA Safety Alliance is compiling the responses into a report that will be released soon. They are the health and safety association for BC’s manufacturers and food processors, and they are leading the BC Safety Charter, along with its signatories.

“We were pleased with the way ideas flowed and with the level of engagement we witnessed from our participants,” says FIOSA-MIOSA CEO Lisa McGuire.

“By placing everyone in smaller groups we removed the anxiety and intimidation that often comes from speaking in a public setting. We look forward to seeing the results of the World Café discussions and believe it is a worthwhile model for future roundtable events.”

The BC Safety Charter was launched in 2011 when 23 CEOs and senior managers signed on to indicate their commitment to lead with safety in mind. It’s now grown to include more than 100 companies and organizations. Congrats to all on the success and continued growth!