Scott Construction won a Builders Code Champion Award for its efforts to support workers’ mental health, which include forming a mental health committee. 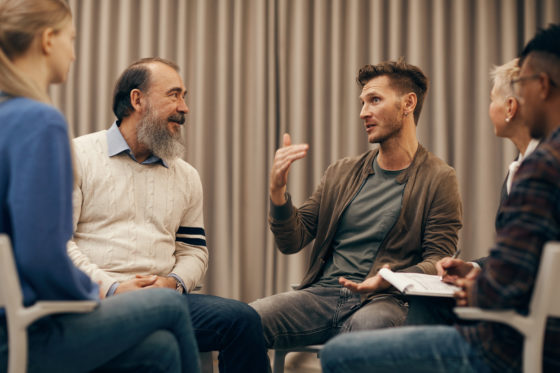 On average, each year, around one in five people in Canada will experience a mental health challenge or illness, according to the Canadian Mental Health Association.

Motivated by the desire to support their workers’ mental health, Scott Construction created a mental health committee that plans activities and provides resources. The committee meets every three months and distributes a monthly bulletin to raise awareness, reduce stigma, and provide contact information for support services. They also set up programs at the company’s office, including mindfulness and yoga programs.

In November 2019, Scott Construction was recognized for all their work to support mental health. They were one of six B.C. construction employers to win an inaugural Builders Code Champion Award. (The Builders Code, launched in 2019, is an initiative that provides B.C.’s construction industry with training and support to address bullying and harassment in the workplace.)

“Scott Construction is very involved and very progressive. If it was up to them, they’d have every construction company start their own mental health committee,” says Lui Garcea, director of Marketing, Partnerships & Provincial TCP Program at the BC Construction Safety Alliance (BCCSA).

The story behind the committee

The idea for Scott Construction’s mental health committee came from their manager of program services, Mike Haley. As described in this Journal of Commerce article, In confronting depression, Haley helps both others and himself, Mike lived with depression for many years. He liked his job and got along with his coworkers, but after work, his life was much different. He didn’t socialize, kept to himself, and essentially suffered in silence.

Mike spoke at BCCSA’s 2019 annual outreach events, along with Donna Grant, Scott Construction’s manager of Marketing & Project Pursuit. They travelled around B.C. encouraging other companies to start their own mental health committees at work.

“When Mike shares his story, it really hits people,” Lui says. “They can say: ‘Okay, it’s not hard to just talk about it.’ If you get people talking, then you start seeing some change. This is important and is really resonating with our industry, so we’ve made it a focus in our outreach events.”

Read more about Mike’s story in the September/October 2019 issue of WorkSafe Magazine. For other resources, see Not Myself Today, a workplace mental health campaign from the Canadian Mental Health Association, and Mental Health First Aid, from the Mental Health Commission of Canada.