Ammonia is widely used and is highly toxic. As part of their responsibilities, employers must plan for emergencies and conduct regular inspections. 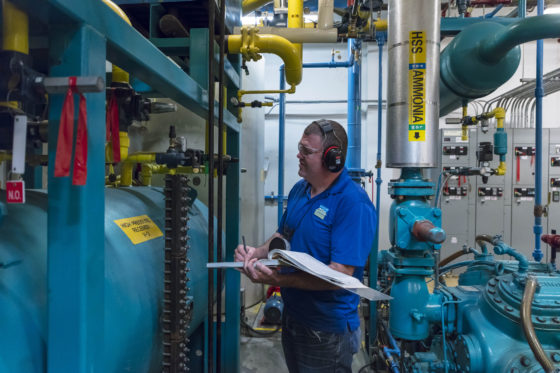 On October 16, 2017, tragedy hit the town of Fernie, B.C. when three workers died while trying to repair an ammonia leak in the cooling system of an ice rink.

To prevent this type of catastrophic event from happening elsewhere, WorkSafeBC and Technical Safety BC have been reaching out to other employers who use ammonia in their cooling processes. (Technical Safety BC regulates the safety of equipment, while WorkSafeBC regulates the safety of workers using the equipment and working with ammonia.) Examples of employers include ice rinks, fish processors, dairy farms, food processors, and breweries.

Recently, I spoke with Jonathan Truefitt, an occupational hygiene officer with WorkSafeBC’s Prevention Field Services. He is one of the officers who has been inspecting workplaces that use ammonia.

Employers at workplaces in B.C. are required by the Occupational Health and Safety Regulation to control the risk of worker exposure to ammonia, which includes conducting a risk assessment, developing an exposure control plan, and having written safe work procedures for working with ammonia and other toxic process gases (see sections 6.116 to 6.132 in Part 6 of the Regulation). They are also required to have a plan for emergencies, such as the accidental release of ammonia, and to test that plan by conducting emergency drills (see sections 5.97 to 5.102 in Part 5 of the Regulation).

“One of the focus areas with our inspections is asking employers questions about their emergency plan,” Jonathan says. “As part of the review of the regulatory requirements, we ask them to look at what they have for an emergency plan right now. Does it make sense? Would it actually work? Have they tested their plan to see if it’s effective?”

“When everything’s working well, it’s sometimes hard to envision how effective your systems will be when things aren’t working well, so it’s important to do drills.”

Jonathan says that as part of the inspections, officers are also asking questions about joint health and safety committee involvement in the workplace. “Is the employer doing regular workplace inspections and is the joint health and safety committee involved? Are corrective actions being followed up on? If they find an unsafe condition, is there follow-up that’s actually being done?”

Thank you to Jonathan for telling me about his work with WorkSafeBC’s ammonia inspection initiative team. For more information see the WorkSafeBC book Ammonia in Refrigeration Systems, which was updated in 2018, and this October 2019 news release: Technical Safety BC urges continued vigilance around ammonia safety two years after fatal leak at Fernie Memorial Arena.

Also see this video from WorksafeBC about the incident in Fernie that I mentioned above: