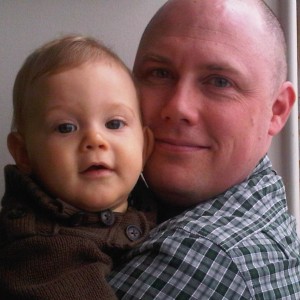 So cute! Baby Alistair and dad Alden were photographed for a new Slow Down poster

This father and son are among the latest BC families to be photographed for the Slow Down poster campaign, which I wrote about last summer.

Alden Calleja is a 35-year-old father who works for the City of Vancouver’s Waterworks Department. He and his baby son Alistair, 10 months, were photographed for the campaign in March. The new poster was unveiled on May 7.

Alistair’s mom Anastasia Andrews (who I connected with via Facebook) is “excited and proud” that images of her son and husband will be used. Their names were drawn from a hat after the City invited road staff to take part.

“Alden is very proud to be involved in something like this that the City’s putting on,” Anastasia told me via phone. “When we see those signs at the side of the road, it’s a reminder that families work there, and they do belong to somebody.” 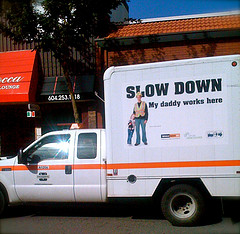 The City of Vancouver is one of 15 BC employers taking part in this campaign. WorkSafeBC and construction industry partners launched it as a pilot project in 2007 with a focus on traffic control people. Since then, it has expanded to include awareness of all workers on the road – such as carpenters, equipment operators, and utility workers like Alden.

Today more than 100 Slow Down signs are posted throughout BC. Many are along high-profile projects like the Sea-to-Sky Highway, the William R. Bennett Bridge, the Canada Line, and on municipal trucks.

Thanks to everyone for your part in conveying the Slow Down message. Your time, effort, and funding is sure to save lives by reminding drivers about the actual person behind a job. That guy working on the road could be Alden, who wants to go home safely to his baby and wife at the end of the day.

2 thoughts on “Father and baby remind us to slow down”