Food truck operators need to know the hazards of working with propane. WorkSafeBC officers are reaching out to raise awareness and offer solutions. 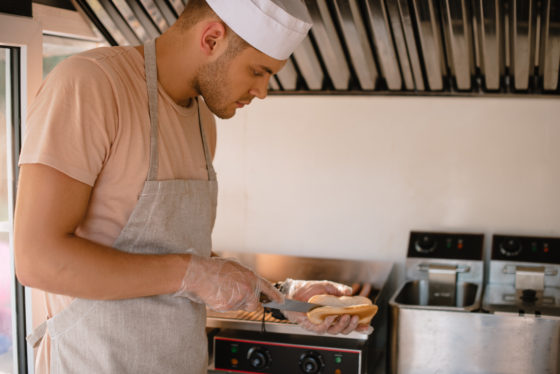 Propane is the fuel of choice for food truck operators. It’s convenient and portable, but can be dangerous: if it leaks, it can build up and explode if it encounters an ignition source.

Rhonda Langlois, an occupational hygiene officer at WorkSafeBC, is raising awareness of this important safety issue that can put both workers and the public at risk. Rhonda and a team at WorkSafeBC are working with other agencies and municipalities throughout B.C. to reach out to the food truck industry, which is made up of “mom and pop” businesses along with food trucks from existing restaurants.

Rhonda’s been talking with these food truck owner-operators, then leaving them with laminated copies of Reducing the risk of propane explosions in food trucks for posting (and washing, as needed). Rhonda says that almost everyone has been very interested in and engaged with the information.

“The bulletin was received really well and food truck operators were quite excited to have that information in the truck, especially for new workers coming on board,” Rhonda says. “They all had an inkling that there was a risk working around propane, but the bulletin provided them with more concrete information on where to look for leaks and what can be a spark or a source of ignition for the propane.”

Connecting with everyone is challenging but not impossible, as Rhonda knows well. Along with visiting individual food trucks, Rhonda’s also been connecting with the coordinators of various festivals, as those are where you’ll find a lot of food trucks set up.

Her list of festival stops have included the Steveston Dragon Boat Festival in Richmond, the Safe & Sound Music Fest in New Westminster, the PNE in Vancouver, the Shipyard’s Night Market in North Vancouver, and the SKOOKUM Festival in Stanley Park. (But not all in one day!)

“The trucks go to a variety of different places, so even trying to coordinate with the municipalities can be challenging because they might be in one place one weekend, and then another place on another weekend. At any part of the day, they might move from one place to the other,” says Rhonda. “We want to make sure we have as broad-based a form of education and communication as we can. Let’s educate them from the beginning – before they go out.”

Where to look for propane leaks in a food truck

According to the bulletin, propane can leak from sources such as:

Incidents with propane tanks and food trucks have happened before, both in Canada and internationally. In one local case, leaking propane during travel and other factors caused a food truck’s propane tank to explode, blowing the doors off the trailer. There was extensive damage to both the trailer and nearby property, but thankfully no one was hurt.

I wrote about food truck safety in my post Safety for food truck operators. It looks at how this group of workers faces many of the same kitchen hazards as workers in traditional restaurants.