The top two steps and bucket shelf of stepladders are not safe to stand on. A grocery store worker fell from the top of a stepladder into a bin of onions. 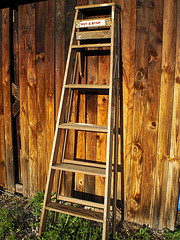 I was standing in the grocery lineup when it happened. A worker slipped from the top of a stepladder (the part you are not supposed to stand on) and landed in the produce bins, on his back. His feet flew out from under him as he stood precariously atop the ladder, trying to put up a sheet of plastic to keep shoppers dry while they chose fruit and veggies from bins outside the store.

“The top two steps and bucket shelf are not safe to stand on,” reads this StartSafe Stepladder Use poster from WorkSafeBC.

Not to mention standing on a stepladder in the rain while wearing running shoes with no grip! He was also overreaching and leaning to one side.

Luckily the guy got up fairly quickly – and guess what he did next?

He got back onto the top of the ladder again and resumed his task! I couldn’t believe my eyes. What was he thinking?!

Maybe he put his safety at risk because he felt pressure from competition and was putting up the sheet of plastic to stop customers from going to a shop with better rain shelter. All I can do is speculate. But a fall like that could be catastrophic, and he was lucky the first time. On average, 10 workers a year die in B.C. after falling from heights.

“Whoa!” said my son, who was with me at the time. “You should write a blog post about this!”

So here it is.