A mechanical engineer shares how her experience with poorly fitting personal protective equipment (PPE) sparked her to start designing safety clothing for women. 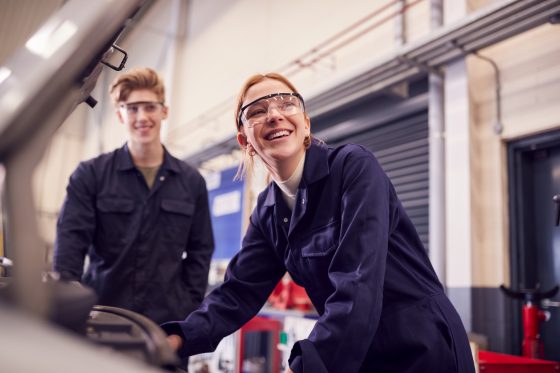 Being able to use a washroom is something we rarely discuss and often take for granted. But for many women who work outdoors, it can be a major ordeal.

“Trying to answer the call of nature while in nature was a task unto itself,” says mechanical engineer Jodi Huettner. She began her career as an engineer in B.C.’s environmental consulting industry in 2011. “My male colleagues could simply use the double-front fly on their coveralls, whereas I had a major ordeal to go through every time nature called. I had to remove my tool belt, high-visibility vest, and jacket. Then I had to expose half of my body to the elements or the accidental glances of nearby co-workers.”

Jodi says the only other option when on a remote worksite was to get a ride to the washroom facilities. This added up to hours of lost productivity.

To reduce trips to the bathroom, some women limit their water intake, which means they’re not getting adequate hydration. These barriers to toilet access can impact the urinary tract, immune system, sleep patterns, and overall productivity, Jodi says.

Coveralls for men are often too large for women, and the excess fabric can catch or snag in machines. Bunched up fabric can also create “shelves” that catch welding slag and hot metal shards, which can result in burns. Poorly fitting coveralls can also impair mobility, affecting female workers’ ability to move their arms overhead, bend their knees, and use their hands or fingers with dexterity.

In 2014, Jodi started Helga Wear, a women’s safety clothing company. “I conducted field testing on tradeswomen. I witnessed the advantages of using women’s anatomy, women’s body data, and womenswear grading rules to design coveralls,” Jodi says. “The fit was so much better, the garments actually sat in the intended place on the women’s bodies while they worked.” She says there’s no constant adjusting the garment, no restricted movement, no awkward body positions to hold the garment in place — and no need to undress fully for a quick washroom break.

Jodi and her team are also advocating for inclusive PPE standards that address the needs of women. They’re working with WorkSafeBC and other industry stakeholders to create a new Occupational Health and Safety Guideline. It would apply to Part 8 of the OHS Regulation and include language that requires a proper fit based on anatomy.

Jodi will be speaking about this important topic at the BC Construction Safety Alliance’s 2022 Health and Safety Conference on Friday, October 21, in Vancouver. Her goal is to educate employers on the harm ill-fitting PPE is doing to their female employees, and how this impacts their bottom line.

“I’ll be telling everybody about the exciting progress B.C. is making toward inclusion,” Jodi says. “Offering women PPE that’s been designed to fit them gives employers a tangible edge over the competition.”

Thank you to Jodi for speaking with me.