When you hear about a firefighter getting injured, you probably picture it happening at the scene of an emergency. But in reality, approximately one-third of all firefighter injuries happen in fire halls. 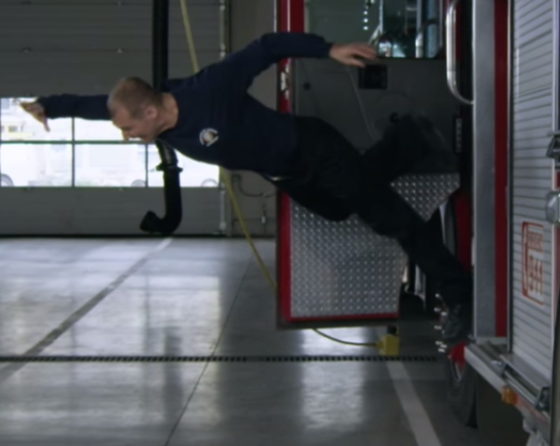 Image from the video Safe In the Hall

“We take extreme caution on the fire scene, and sometimes it’s the more everyday duties in the fire station that probably don’t get the care and attention they should,” says Deputy Fire Chief Russ Jenkins of the Township of Langley Fire Department.

This type of “injury when you least expect it” can happen in any industry. We often focus on the major tasks and forget about things that seem like smaller details. That’s why the BC Municipal Safety Association partnered with WorkSafeBC and created a discussion guide and video called Safe in the Hall, recorded at the Township of Langley Fire Hall.

“We recognized a need to highlight these statistics, to make firefighters aware of hazards in the fire hall,” says Cathy Cook, executive director of the BC Municipal Safety Association. “If they are aware of the potential hazards, they can take steps to eliminate or at least reduce the risk of injury.”

Slips, trips, falls, and overexertion were some of the leading accident types — just like in so many other industries. Garry Wilson, an industry specialist with WorkSafeBC, says the video team consulted with subject-matter experts in the fire service.

“They guided us on how it would happen and how it might look, to provide realism, so firefighters will recognize this can and does happen,” Garry says, describing how injury affects life beyond the workplace. “It’s not just physical and it’s not just being off work. Those injuries impact your life outside of work no matter who you are.”

The video was shown at the annual BC Fire Chiefs conference and can be used in training, orientation, and crew meeting sessions. Notice the nasty (but effective) sound effect used for the back strain injury. Ouch!