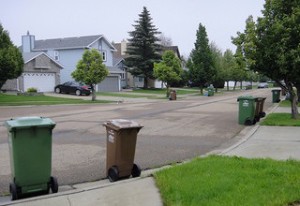 Humans make a lot of garbage. This puts a big demand on workers in the waste and recycling industry.

Facing a bigger-than-average risk of injury from overexertion, many of these workers drive 10-hour shifts and stop at up to 1,200 homes, where at least two containers are left for pickup.

To address these risks, Nick Zivkovic and his team at BFI Canada are using new technology to lighten the load.

“We are always trying to see how we can automate systems and take burden off our workers,” said Nick, who is the Regional Safety Trainer for BC BFI Canada Inc.

New trucks – with automated lift arms – in Surrey and Coquitlam are cutting the need for manual lifting. More new trucks are on order for other regions. In the meantime, existing vehicles have been fitted with “toter lifts” that also reduce lifting demands on workers.

New workers learn about the risks of the job during a two-day, in-class orientation that includes pre-shift stretches (and much more). This is followed by a five-day, one-on-one shift in a truck with an experienced driver.

At the end of training, each new driver is tested by a manager who gives sign-off to those with the right skills. Managers do regular on-road observations of each driver – and during these tests, drivers have a chance to bring up any concerns they may have.

Nick and I talked about these stats from WorkSafeBC, which reports the injury rate for Classification Unit 732018 – garbage/recycling – as 7.3 – more than three times the provincial average of 2.3.

“Lots of companies aren’t moving forward with the technology out there,” he said. “They’ve been old school for too long – doing as much manual lifting as possible.”

Nick drove a garbage truck for six years before moving into Operations, where he was “volun-told” into leading a safety committee. Now he’s been a safety manager for eight years.

Recently Nick coordinated a new safety council within the Waste Management Association of BC. He’s also on the SafetyDriven Board of Directors and technical advisory committee for trucking, transport, and related industries.

In other words, when it comes to safety, Nick is The Man. I thank him for telling me about his work.