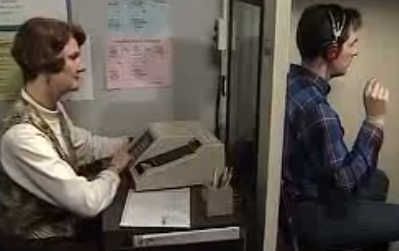 Image from The Hearing Video by WorkSafeBC

Workers in the upstream oil and gas and pipeline construction industries are losing hearing more than workers in other industries.

This information was uncovered in 2014 during annual hearing tests required for everyone exposed to hazardous noise levels in the workplace. Employers in BC are required to minimize this risk to workers, by using hearing loss prevention programs.

Workers in oil, gas, and pipeline are showing “a concerning amount of hearing loss,” says WorkSafeBC in this recent bulletin.

Sasha Brown is an occupational audiologist with WorkSafeBC who is analyzing hearing test results. She and her team at WorkSafeBC plan to follow up by visiting these worksites in 2016 to learn more about the exact sources of noise exposure and how to minimize workers’ risks from it.

Loud noise is generated by all aspects of well-drilling and servicing, as well as pipeline construction. It blasts out from things like pneumatic in-loading of sand, noise generated by pumps and engine rooms (for heating and pumping water), nitrogen pumping and purging, and more.

“For many jobs, the noise exposure is constant,” Sasha says. “For example, hydraulic fracturing and the equipment used in this process produce excessive noise levels, and often workers are required to be near the equipment all day.”

Among those who did the hearing tests, 33 percent showed signs of noise-induced hearing loss – which is more than double the 16 percent average for workers in noisy industries. More than half of those workers with hearing loss are 35 and under, which shows that hearing loss in these industries is not simply a by-product of aging.

Some workers do not use adequate hearing protection. Others use none at all. Why?

A worker may remove a hearing protection device (HPD) for a variety of reasons, says Sasha.

“They may be under-estimating the risk, or they feel unsafe or isolated because they are unable to hear warning signals or shouts,” she says, describing how some say they feel uncomfortable if the hearing protection makes them less able to communicate with others.

“In these cases, it is important to determine why a worker removes their HPD, and select a more appropriate HPD. In my experience, there is always an HPD that will mitigate the concerns of a worker; it is a matter of figuring out what those concerns are.”

Seventeen percent of the 35-and-under group in Oil and Gas Field Servicing, for example, report that they do not use hearing protection, and for workers under 21, that number rises to 27 percent.

You can find much more information on this topic at WorkSafeBC’s Hearing Loss Prevention portal. Thanks to Sasha for answering my questions and for all her efforts in support of workers’ hearing.