As Nanaimo’s newest fire chief – and its first-ever female fire chief – Karen Fry says the key to safety is dealing with issues as soon as they arise. 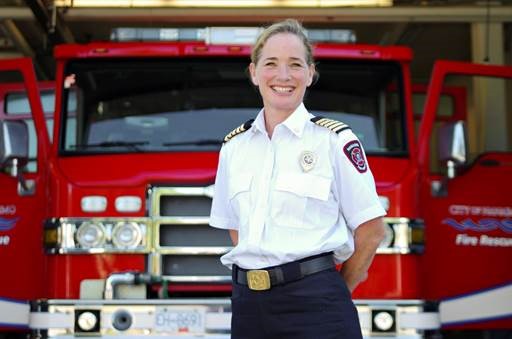 Karen Fry is the City of Nanaimo’s newest fire chief. She says it’s important for management to show staff that their health and safety is important.

“We try to deal with safety concerns as soon as we hear about them,” Karen says. “It’s important for our employees to know we really take their health seriously.”

When you hear about a firefighter getting injured, you probably picture it happening at the scene of an emergency. But in reality, about one-third of all firefighter injuries happen in fire halls. I wrote about this in my post Injuries happen when you least expect them.

“A lot of the injuries are strains, sometimes resulting from simple things like twisting wrong or trying to rush through something,” Karen says. “We see knees, ankles, backs, and shoulders strained from lifting, pulling, and stretching.”

As she settles into her new role, Karen says she and her team will continue to work on their health and wellness program. She says it’s a broad program that includes mental health strategies, critical incident stress management, focusing on fitness and nutrition, and much more. You can read more about her work to promote firefighters in the community and to educate people about fire detectors and other safety issues in this Nanaimo News Now story.

As Nanaimo’s first female fire chief, Karen encourages women to see firefighting as a viable career. She supports Camp Ignite, a four-day camp that introduces teenage girls to the world of firefighting.

“It’s an opportunity for them to discover that they could have a viable career in the fire service,” she says. “If people don’t see themselves in the department, they don’t even consider it to be a career choice for them.”

“The first thing most girls think is that they have to be physically stronger than they are now. But, in general, we’re a lot fitter than we used to be 30 years ago – and longer into our careers, too,” Karen says.

“You definitely have to be able to hold your own but I think that people are sometimes too hard on themselves. They’re too critical without believing they can do it.”

Thanks to Karen for talking with me and also for encouraging young women to believe in themselves.