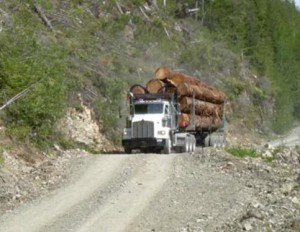 A standardized set of radio frequencies has been established for use on BC’s back roads. During the next couple of years, forest industry workers and other road users will be asked to reprogram their radios in this effort to “help ensure safe passage,” as it’s described in this press release from the Government of BC newsroom.

It’s part of an effort to create a more organized system of communication on the roads – and better safety. Industry Canada is working with the Ministry of Forests, Lands and Natural Resource Operations to roll out the standardized radio communications, call procedures, and signage throughout BC.

“What we’re aiming to do is standardize channels across the province, so truckers will only have to program their radios one time – ever – and then they will have all the channels for roads in BC, regardless of where they operate,” said Brad Davis, Industry Canada’s Spectrum Operations Manager.

I wanted to know how often drivers travelled the roads without knowing which frequencies were in use, so I asked Peter Bueckert, Driver/Supervisor with J Bueckert Logging Ltd. in Fort St. John.

“Hundreds of times – every day til now,” he said, giving an example.

“Lots of times people come in from Alberta, where there’s lots of infrastructure that goes into the oil patch. They come through Fort St. John and then head north to get on a resource road,” Peter said.

“They’re not turning around to come back to Fort St. John to get the proper resource road channel, then heading back out. They’re just going to go dump their load. It happens all the time – or did happen, but it’s going to end now.”

Dustin Meierhofer is the BC Forest Safety Council’s Director of Transportation and Northern Safety. He explained how it’s been for drivers travelling through different regions.

“You could go – for example – from Vancouver Island and have a predetermined set of frequencies in your radio, then go up to Prince George, where very few – or maybe none – of your channels matched with what was being used in the Prince George area,” Dustin explained.

“It creates a bit of a logistical challenge for people because they have to find out what a particular area’s channel list is and often that can be a bit challenging.”

Removing this communication challenge is the goal of it all – and I’ll report back with progress.