You’ll soon see signs about vehicles needing chains and winter tires when driving on B.C. highways this fall and winter. Are you prepared? 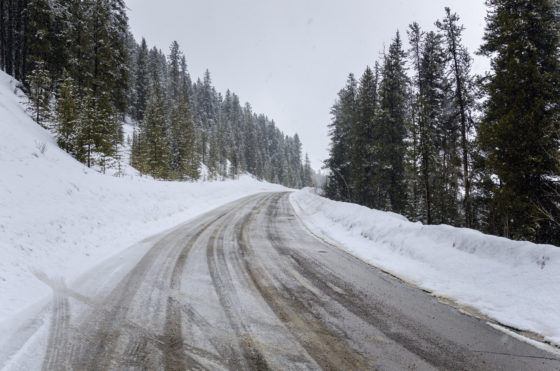 Even though summer is barely over, it’s not too early to prepare yourself or your workers for driving on wintry roads.

If you drive a commercial vehicle, this means you will need to carry chains (or other traction devices) between October 1 and March 31. For some highways, the end date is extended to April 30 — that’s actually a month longer than in previous years.

The B.C. Ministry of Transportation and Infrastructure extended the time period because some routes can still be treacherous past March 31. (See more information about this.)

Rules apply regardless of weather conditions

I got in touch with Kevin Bennett, WorkSafeBC industry specialist for transportation and road safety, and he told me that the rules requiring chains and approved traction devices are in effect regardless of winter conditions. He also cautioned that not having them could mean charges under the Motor Vehicle Act or your vehicle being turned back.

He added that carriers are responsible for ensuring their drivers are winter-ready. This includes confirming that drivers know how to safely and properly install chains or traction devices, and that they know the chain-up/pull-out locations for their routes.

People driving passenger vehicles on B.C. highways must have tires with at least 3.5 mm tread that are labelled with either the “mountain snowflake” symbol or the letters “M+S” (indicating they are mud and snow/all-season tires).

Kevin pointed out that winter tires in particular offer numerous safety benefits, including improved stopping distances when the temperature drops below 7 degrees.

How to put on tire chains

While some drivers have much experience putting on tire chains, others do not. If you fall into the latter category, check out the video below from TranBC for detailed instructions on how to do it. (Although the video is geared towards commercial vehicles, drivers of passenger vehicles would benefit from watching, too.) It can be pretty stressful trying to figure out how to put on your chains for the first time when it’s snowing and you need to get somewhere.

In fact, I heard a story about such a situation from a commercial driver years ago. The driver was on his way up a mountain pass, going past a chain-up area, when he noticed a man removing chains from the trunk of a small car. Later, he saw the same car was stuck, blocking traffic. Inside the car, the man and a woman were having a very heated argument about how to put tire chains on correctly.

Luckily for this couple, the commercial driver helped them put the chains on properly. Read my post No argument about safe winter driving for the full story. Also watch the video from TranBC and practice putting your chains on, so you can be prepared and keep the peace.

See Shift Into Winter for resources on how to stay safe and reduce the risk to your workers during the B.C. winter driving season. And check out WorkSafeBC’s Winter Driving page.