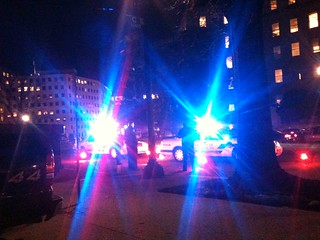 A dad in our neighbourhood died by suicide a couple of years ago. I thought about him when I read about the high number of suicides among people who work with trauma – such as paramedics, police, emergency doctors, and soldiers.

This man was a front line worker who told me his job was a constant reminder that “we are all so vulnerable,” as he put it. We were in a cafe, sipping our coffees while our sons played with Pokemon cards.

“Anything can happen to anyone at any time. That thought really haunts me. It’s hard to explain it,” he said, before quickly changing the subject – kind of laughing it off, and joking that he “didn’t want to get too morbid.”

A couple of months later, I heard he’d quit his job and was suffering from depression. Shortly after that, he took his own life.

I’ve been reading (and hearing on CBC radio) about a need for improved access to mental health care for first responders. Many live with post-traumatic stress disorder (PTSD), depression, anxiety, and other mental health struggles.

“Mental illness is hitting our front line workers like a sledgehammer,” say organizers of the Bottom Line Conference Feb 24 and 25 at the Vancouver Convention Centre.

Suicide is the cause of death for 160 Canadian soldiers from 2004 to 2014, says the Canadian Mental Health Association (CMHA), the conference host.

CMHA reports that more than 24 first responders took their own lives in a six-month period in 2014.

“It seems every month we are looking at headlines about a police officer who has died by suicide. It’s time to start asking difficult questions. It’s even more important to start listening to those who have answers. We need to better protect those who commit their lives to protecting us.”

“The 12th annual Bottom Line Conference will offer a venue for front line workers, unions, employers, not for profit organizations and governments to come together to talk about lessons from the front line and answer the question: How can we better protect the psychological health of our front line workers?” reads this CMHA press release.

My greatest respect goes to the people we call when we need help. They deserve our help when they need it – so it’s time for all involved to step up.

2 thoughts on “Protecting the mental health of front-line workers”