Today, April 28, is the the national Day of Mourning to honour the memory of workers who have been killed, injured, or suffered illness as a result of work-related incidents. 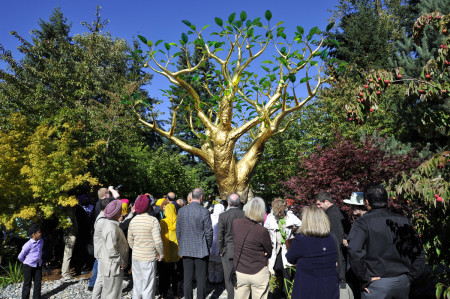 The Golden Tree, image used with permission from the BC Federation of Labour

Many are observing this day at ceremonies throughout BC – and one of them is in Abbotsford by The Golden Tree, a beautiful monument created in memory of three women who died in 2007 in an overcrowded van on their way to work on a farm.

Please take a moment to think about 52-year-old Amarjit Kaur Bal, 41-year-old Sukhvinder Kaur Punia, and 31-year-old Sarbjit Kaur Sidhu. It makes me sad, and very angry, to think about what happened to them – how they were crowded into a van with 14 other workers when their driver lost control on the highway.

It was still dark out, raining heavily in the early morning rush hour, as the driver headed to a Chilliwack farm where they worked. Only the driver and front seat passenger were wearing seat belts, according to the coroner’s inquest.

“Some of the passengers were ejected during the rollover while others remained pinned in the vehicle,” reads the coroner’s report. “The van was in legal violation of the legal requirement for the provision of seat belts for all passengers as it contained no seat belt assemblies for any passengers in the rear compartment of the vehicle.”

Some passengers sat on a “makeshift wooden bench with no seat cushions and exposed nail heads” at the back of the van, acting as a fourth row of seats in the van designed to carry 15. The tires were substandard and not inflated properly.

In court, the driver pleaded guilty to driving without reasonable consideration, and driving without a proper license. The coroner made 18 recommendations, the first of which is to “educate farm workers of their individual rights, safety, and responsibilities with the inclusion of farm worker representatives on an enforcement and safety committee.”

It was also noted that the workers were new to Canada, had limited English skills, and may not have known about their “right to safe transfer to and from worksites.”

None of this brings back the three women who died. All we can do is learn from the tragedy and try to prevent it from happening to others – and that’s exactly what safety advocates are doing.

Now a sculpture stands in memory of these workers. It’s a 22-foot-high replica of an apple tree, designed by Christina and Dean Lauzé.

“The Golden Tree will stand as a monument to these women, the sacrifices of their families and friends, and as a powerful reminder of the consequences of unsafe work,” reads the Golden Tree website.

We must remember them – and everyone else who died at work – not just today, but every day. Let’s keep them in mind and do all we can to keep workers safe.