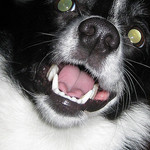 It doesn’t take much. Even small pets can cause big damage – and in this post, Pet store dog bite, I told you about a pet store manager who was bitten on the face by a dog who reacted to her attempt to put a muzzle on him.

I can see how a pet would get self-protective in a situation like that – and the same goes for getting groomed, which generally isn’t something pets enjoy. Recently I talked with an animal groomer who gave my little dog a trim. I held the dog while she sheared him with her clippers, and she asked me to keep a gentle hold on his head, so he couldn’t turn and bite her. Apparently it happens fairly often – and suddenly.

“Wow. That’s quite the occupational hazard,” I said, telling her about my safety blog. “You must have some stories.”

While she’s never been badly injured, she’s been bitten, scratched, and knocked over. I have another friend who works at an animal clinic and describes the same sorts of minor injuries to staff. Muzzling the dog (carefully, with help) is one option, along with proper support from another person if necessary.

How often are workers injured by animals?

In 2011, a WorkSafeBC claim was accepted when a worker diving for geoducks was pushed by sea lions. Another 2011 claim involved a worker being bitten on the nose while feeding a lemur.

But WorkSafeBC’s Fact Sheet: Injuries Related to Animals reports some unusual injuries in BC from 2005 to 2011, including:

Definitely some unique injuries, aren’t they?

For more info, read Beware of bears and be prepared from WorkSafeBC.