It’s Canadian Agriculture Safety Week, March 11 to 17, and activities are taking place across the country.

Here in BC, the launch was held at a Kelowna winery, where reps from the Farm and Ranch Safety and Health Association (FARSHA) and the Canadian Agricultural Safety Association (CASA) gave updates on innovative farm safety initiatives in BC, said FARSHA website.

I’ll update you on BC activities as I learn more, and in the meantime, I’ll tell you what’s happening in the province next door. I contacted Kenda Lubeck – farm safety coordinator for Alberta Agriculture and Rural Development – to find out more about Alberta’s main message: “Everyone on a farm is responsible for safety.” The Alberta Farm Safety Program‘s I Have A Role” campaign is set for launch during March 11 to 17.

“Our hope is that this campaign will create more discussion around safety at all levels on Alberta farms,” Kenda said. “By calling out roles and responsibilities it brings the focus to the importance of human life rather than getting the job done regardless of the cost.”

Too many preventable deaths

Eighteen people die in farm-related incidents each year in Alberta. That’s why the new campaign emphasizes the important role of everyone in the agricultural industy – including parents, farm owners, workers, equipment dealers, and community groups. 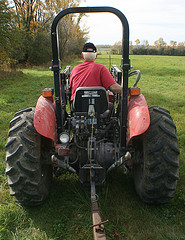 “Plan • Farm • Safety” is the theme of the three-year Canadian Agricultural Safety campaign which began in 2010.

“The 2010 campaign promoted “Plan”, with safety walkabouts and an emphasis on planning for safety. In 2011, the focus was on “Farm”, with highlights on implementation, documentation and training,” reads the CASA website.

This year’s campaign on “Safety” focuses on the assessment, improvement and further development of safety systems.

Thanks to Kenda for sharing her story – and let me know if you’re taking part in any activities so I can praise your efforts and tell everyone! 😉