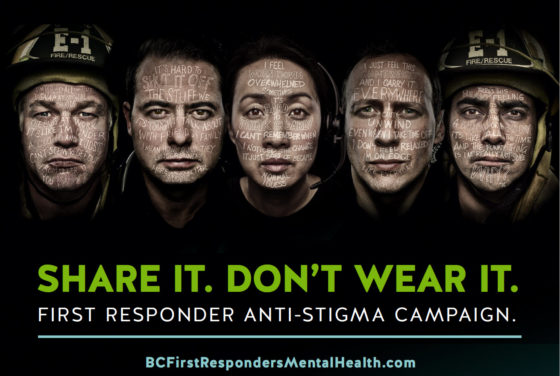 Paramedics, firefighters, police officers, and other first responders do a job like none other and are the people we call when we need help.

But by now we’ve all seen media stories about first responders being more likely than the general population to experience depression, anxiety, and post-traumatic stress disorder. (For example, see this recent Vancouver Sun story, B.C. first responders: When the helpers need help but are afraid to ask.)

In response to this growing crisis, the BC First Responders’ Mental Health Committee was formed in December 2015. It’s made up of managers and workers from 13 organizations including law enforcement, firefighters, ambulance services, dispatchers, and First Nations emergency services.

WorkSafeBC’s Trudi Rondou, senior manager of program development and services, chairs the committee. She told me about their survey to learn about first responders’ perspectives on mental health, stigma, and seeking help.

“We took the words we heard from first responders about how they were feeling and put them on the faces in the posters for our ‘Share it. Don’t Wear It.’ campaign,” says Trudi. The feelings written on the faces include statements such as, “I feel worn down and overwhelmed” and “I just feel this giant weight and I carry it everywhere.” (You can download the posters and find other resources on the BC First Responders’ Mental Health website.)

The committee distributed the posters throughout B.C. and did a follow-up survey with different first responder groups. Says Trudi: “More than half of the respondents who recalled the campaign said they would be more likely to ‘share it’ and speak up than they would have been before.”

Keeping up the conversation about mental health

To continue supporting the first responder community, the committee has organized the BC First Responders’ Mental Health Conference, which will be held January 31 to February 1, 2019. Response to the conference has been extremely positive — it’s now sold out and there’s a growing waitlist of people who want to attend.

“I’m really excited that there will be a combination of lived experiences, expert speakers, and researchers at the conference,” says Trudi. “Hopefully, that will give the audience tools and resources so they can go back to the workplace and do things differently.”