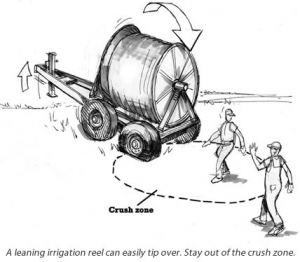 A farmer was changing a flat tire on an irrigation reel when the reel tipped over and crushed him. The reel, which was wound with 400 metres (1,300 feet) of water-filled hose, weighed about 8 tonnes (18,000 pounds). Tragically, the farmer died of his injuries, according to this fatality alert Farmer crushed by irrigation reel from WorkSafeBC.

Tragedies like this are all too common on farms, where kids’ safety is also an issue. Each year, on average, 13 kids are killed on Canada’s farms – and that’s why the Canadian Agriculture Safety Association is reaching out to communities throughout the country. One of their biggest initiatives – in addition to Agriculture Safety Week – is Progressive Agriculture Safety Day® events in 2013.

More than 13,500 kids and participants will take part in the activities organized by safety groups in Canada’s rural communities, including several 4H clubs. They look at local safety issues such as sun safety, chemical exposure, and handling animals. I spoke with CASA’s executive director, Marcel Hacault, and asked him to tell me more about the benefits of getting kids involved.

“We are trying to change the culture of farming, and one of the ways we do that is by targeting the pre-culture change. In most rural communities there are at least a couple of kids who are from a farm, or end up being farmers or working for farmers in the future,” he said, via phone from Winnipeg.

“The benefit we see is that it’s been shown to change behaviour in kids and also the volunteers. For every safety day, there’s about one in 10 adult volunteers who attend who are also learning about safety messaging and how to behave safely.”

Marcel said people who are interested in hosting a safety day in their own communities can visit the CASA website to find out more. Congrats to him – and everyone else involved – for generating so much interest in this important issue.