Flushing toilets can release norovirus and other pathogens into the air. A study shows how UVC technology can prevent the spread of bacteria in hospitals. 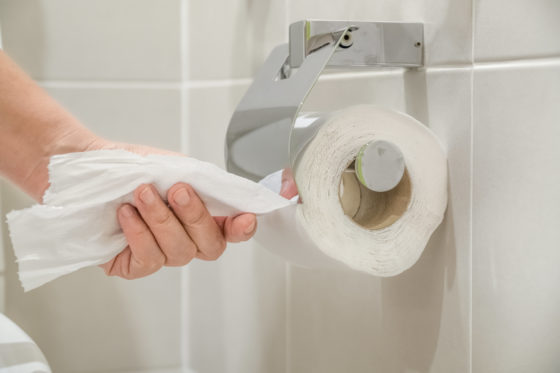 You’ve likely heard that germs can be released into the air when a toilet flushes. Well, recently I learned a few more details about this unpleasant but interesting topic. (If you’re eating lunch right now, you may want to finish before reading on.)

Jesse Cooper is an occupational hygienist, with a background in microbiology and immunology, who works for Vancouver Coastal Health. While earning his Master’s degree, he studied how germs “aerosolize” when toilets are flushed and what can be done about it.

Norovirus under the microscope — and in the air

Norovirus is one pathogen on Jesse’s radar (or under the microscope). It can lead to a nasty form of gastroenteritis that lasts up to three days. Aside from the common cold, norovirus is the most common virus to infect people.

Norovirus is of particular concern for workers in hospitals. From 2011 to 2015, almost half of all the disease-related claims from health care workers were due to norovirus.

In the first part of his study, Jesse used a surrogate virus with a size and shape similar to that of norovirus. He grew that surrogate along with other types of germs in a lab at the University of British Columbia. They were, as Jesse put it, “in concentrations comparable to what’s seen in human stool.”

He took the viruses and put them into toilets in a hospital bathroom. Then he flushed the toilets, and collected air samples at various locations and time points. The norovirus surrogate was detected at concentrations far above the infectious dose for norovirus (18 virions), and infectious phage particles were still present in the air for up to 60 minutes post-flushing.

These findings suggest that flushing toilets may be contributing to disease transmission, so having a way to control the spread of pathogens in bathrooms could reduce the risk of exposure for health care workers, hospital cleaning staff, and patients.

One solution for preventing disease transmission is ultraviolet C (UVC) lighting technology. It breaks down pathogens and prevents them from spreading.

In the second part of his study (funded by a WorkSafeBC Research Training Award), Jesse evaluated how effectively an automated UVC device could sanitize a hospital bathroom. This time around, the study team didn’t grow organisms. Instead, throughout the day, they sampled the air and various surfaces in two washrooms — one that had a UVC device and one that didn’t.

Says Jesse: “We saw significant reduction in airborne bacteria in the bathroom with UVC, but we saw an even greater reduction on surface-level bacteria — on the counter and on the toilet seat as well.”

Based on these findings, Vancouver Coastal Health has purchased more automated UVC devices for their bathrooms. It’s expected this will reduce the transmission of pathogens spread by flushing toilets.

To learn more about how UVC technology is being used, read this Maple Ridge-Pitt Meadows News article about Violet, a “germ-zapping robot” deployed in Ridge Meadows Hospital to rid rooms of superbugs.

Read more about norovirus on worksafebc.com.

Thanks to Jesse for telling me about his work.