Spring ahead, fall back. That means we get an extra hour of rest on Sunday, November 6, 2016 at 2 a.m., when clocks are set back to 1 a.m. in regions that practice Daylight Savings Time. 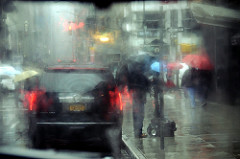 Photo: “Looking through the windshield” by faungg on Flickr

While it’s nice to “gain” an hour of sleep during the night, we also “lose” an hour of light at the end of the day. According to ICBC, this leads to an increased number of vehicle crashes in the late afternoons in the two weeks after the time change compared with the two weeks before.

“As B.C. returns to standard time, we are asking all drivers to take extra care on the roads, as the time change can affect us all in different ways,” says ICBC’s Sam Corea, Senior Communications Specialist – Media Relations. “The biggest impacts can be felt on some of the key skills that affect the quality of our driving – concentration, alertness behind the wheel, and reaction time to potential hazards.”

This is important information not just for people who drive during a work shift, but also for everyone else on the roads – including pedestrians and roadside workers.

Watch out for pedestrians and roadside workers

ICBC warns about a spike in pedestrian crashes during this time of year, as the weather gets cold and nasty. On average, 59 pedestrians are killed and 2,300 injured in crashes every year in B.C., with almost half of the fatalities (46 per cent) occurring between October and January.

Then there are the people who work on the road, in what we’ve been calling The Cone Zone. They could be municipal workers, landscapers, flag people, tow truck drivers, road construction and maintenance workers, telecommunications and utility workers, police, or emergency personnel.

Drivers in B.C. are required by law to slow down when we see flashing lights – and not just the “red and blue” kind that seem to get the most attention. When vehicle lights are flashing, drivers must slow their speed to 70km/h when in an 80km/h or over zone, and to 40km/h when in an under 80km/h zone.

ICBC offers these tips for adjusting to the time change, which includes a reminder that “…in darker, poor conditions, visibility is significantly reduced, making it difficult to see pedestrians and cyclists on our roads. That’s why it’s important to give yourself extra time so you aren’t rushing, and to adjust your speed to the conditions you encounter.”