Losing a boot is not usually considered a good thing – but that’s exactly what it was for Lisa Houle during her first summer planting trees.

Like many new treeplanters, Lisa didn’t realize the importance of choosing the right boots for the job.

“My first year, I had boots given to me by someone who had quit. They never fit right in the first place,” Lisa said. “When I lost a boot, it was the best thing that could have happened to me because I probably would have kept working in those stupid boots for the rest of the season.”

Twenty years later, Lisa is a forest industry specialist with WorkSafeBC. She sent me a link to this article “Back By Popular Demand: The Footing and Footwear Report” from the BC SAFE Silviculture Program. 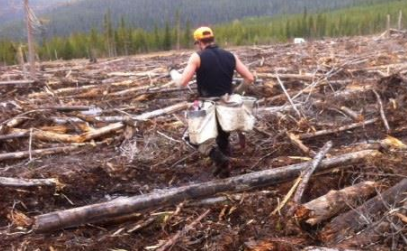 Image from BC SAFE Silviculture Program’s Footing and Footwear Report

The article links to a summary of the 2015 WorkSafeBC-funded research into footing and footwear in the silviculture industry. Slipping, tripping, and falling are “significant” injuries in silviculture and cost the industry up to $1 million annually based on WorkSafeBC claim statistics, says the report.

“Footwear and its possible relationship to injuries has largely gone unexamined in the sector,” it reads. “It may be the case that footwear is so obvious it has gone unnoticed.”

Researchers visited four planting camps in the spring of 2014, in BC’s southwest Interior, the East Kooteneys, and the Prince George region. They interviewed 50 workers and observed them on the job.

Lisa described the demands of the job, where planters walk five to 10 kilometres a day, carrying trees and tools, working in various conditions.

“Taking care of your feet is a really important thing to do,” Lisa said, laughing at the obviousness of her statement. “I know that sounds really obvious but we think it’s okay to take our feet for granted, but in this type of work environment – between slips and falls, infections, and being constantly wet, your feet go through a lot in this work.”