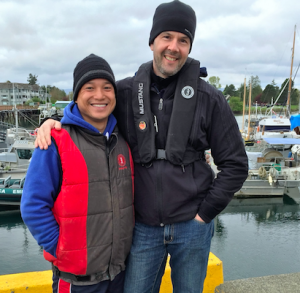 Wearing a personal flotation device (PFD) can save your life. No doubt you’ve heard that before. WorkSafeBC requires workers to use a PFD when working on the deck of a fishing vessel where the work process exposes the crew to a risk of drowning.

That said, many fishing industry workers still choose not to wear one. I wondered why and asked Ryan Ford, Program Manager of Fish Safe BC. He said there were many reasons and he’d give me the top two.

Number 1 is complacency, he said.

“Human nature is such that many feel that if a bad thing hasn’t happened to them in the past, it probably won’t occur in the future,” Ryan said.

“In fishing, there are many who have fished for ten, twenty, thirty years and the thinking goes that because they have been ‘ok’ in the past, they will be fine in the future.”

Fish Safe BC runs a Safest Catch workshop that is free of charge to all BC commercial fishermen.

“We try to overcome this thinking in our programs by having down-to-earth, non-confrontational conversations about actual incidents that involved experienced fishermen losing their lives due to falls overboard. Falls overboard along with vessel stability issues are among the biggest risks to fishermen regardless of experience,” Ryan said, describing the program created by and for people in the fishing industry.

“Our Safest Catch workshop is our marquee program and takes place on a fisherman’s own vessel and allows our safety advisors – experienced commercial fishermen themselves – to share a variety of PFD options we bring that they may not have seen before.”

The second reason people don’t use PFDs is they find them too hot or bulky. Others say they can snag on objects as they work on the vessel.

“These concerns are not without merit in some cases,” Ryan says, “We try to overcome these perceptions by introducing fishermen to a variety of different types of PFDs that some fishermen are now regularly wearing comfortably while working.”

People have lots of options in PFDs now that are both easy to work in and compliant with WSBC requirements. Do you have one to recommend?