Propane tanks, chemicals, and lithium ion batteries can explode in recycling facilities. Employers and the public can help prevent this workplace safety hazard. 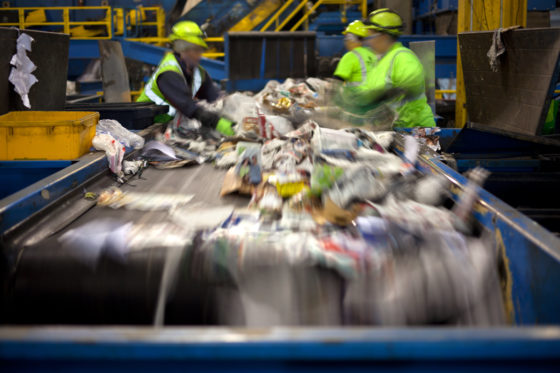 People need to be much more careful when they drop off hazardous materials at recycling depots. Paint cans, aerosol bottles, lithium ion batteries, and other flammable items can lead to serious safety hazards for workers who collect and sort these items. It’s especially dangerous when the items are in bags or not clearly labelled.

“We have a surprising number of fires and explosions at recycling facilities and scrap yards. When they happen they’re bad,” says Gordon Harkness, a manager with WorkSafeBC’s Risk Analysis Unit.

Flammable items can ignite and/or explode when they’re crushed, compacted, or shredded during the recycling process. Using high-heat tools – like torches – ups the risk even more. It also happens at facilities where cars are taken for recycling and shredding.

Here are a few examples of these incidents from WorkSafeBC:

People can help prevent these incidents by not putting hazardous things into their recycling bins. It’s time to stop what’s known as “wish-cycling” – throwing hazardous or non-recyclable items into blue bins and just hoping or wishing they get recycled somehow.

How can employers keep workers safe in recycling facilities?

Employers in these facilities can reduce the risk for their workers by implementing safety solutions, including:

For much more advice on the above, see this new safety bulletin from WorkSafeBC: Reducing the risk of fires and explosions at recycling facilities.

To see another example of these incidents, read this WasteDive story about a major fire that shut down an American recycling facility for nearly a year. Also see this Saskatchewan Star Phoenix story about the increased number of contaminated items going into their city’s sorting facility during the past three years. They’re finding flammable items along with other hazardous objects, including needles, axes, and chainsaws.

Seriously!? Sometimes it’s hard to fathom what people are thinking. We can do so much better!