“If I could save another person from drowning … I’ll be so happy.” Survivors speak out with hope in new WorkSafeBC video to keep others safe on the water. 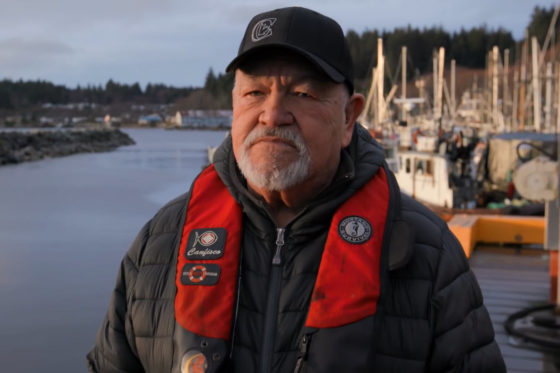 Wearing a personal flotation device (PFD) could have made all the difference. That’s the message in Turning the Tide: PFDs in the Fishing Industry, a new video from WorkSafeBC. In the video, people who survived disasters at sea share their stories in hopes of keeping others safe.

One story is from Chris Cook, skipper of the FV Westisle, which capsized in 2008. He and four others survived but, tragically, one man did not: 70-year-old Pat Alfred of Alert Bay, a well-known fisherman with 60 years of experience on the waters. In the video, Chris and another survivor, Dennis Woloshuk, describe the terrifying experience of being out there in the dark cold water after the ship went down — and how wearing PFDs could have made a difference. Says Dennis, “If we all had PFDs on, we more than likely would’ve found Pat, right then and there.” (You can read more about Pat Alfred’s life, loved ones, and community in this Times-Colonist story.)

We also hear from a mother who lost her son. Ben Dick was only 25 — a commercial fisherman on his first job when he fell overboard. He might not have died if he had been wearing a PFD. Says his devastated mom: “It doesn’t seem complicated. It’s the most basic of safety items on a boat.”

I suggest you watch the video yourself (and be prepared for tears). I’m thankful to these survivors for sharing the painful memories of their experiences for the benefit of others’ safety.

PFDs save lives in shallow water too

PFDs are also essential outside the fishing industry. For example, look at a cranberry harvest, when fields are flooded with water. If people fall face down into water, they can drown, even if the water is only a few inches deep. I wrote about such a tragic incident in my post Lifejackets and PFDs essential for a safe cranberry harvest.

The safety culture is changing when it comes to PFDs, but there are still some people who choose not to wear them. In my post What stops fishermen from wearing PFDs?, I shared the top two reasons why not, according to Ryan Ford, Program Manager of Fish Safe BC.

For more information about PFDs and water safety, visit worksafebc.com and Fish Safe BC.