Some restaurant workers are choosing sneakers instead of heels. One server welcomes B.C. regulation changes that stop employers from requiring high heels. 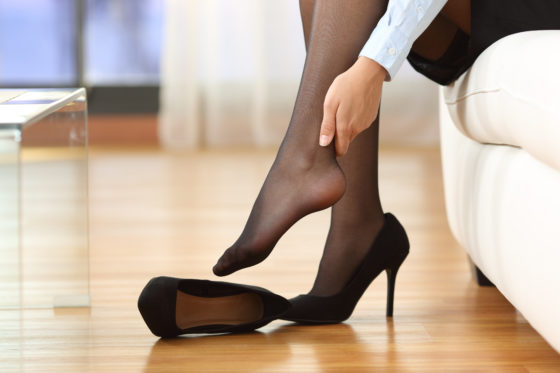 I asked a friend of mine – let’s call her Charlotte – what she thought about amendments to the B.C. regulation on occupational footwear that essentially bans employers from requiring heels. She’s 39 and has been working as a server in restaurants on and off since she was 16.

“I’m surprised it took so long for this law to be put into effect,” Charlotte says. “The best kind of shoes to wear are shoes designed for people who are on their feet a lot.”

This CBC story quotes a B.C. government press release about why the law was changed: “There is a risk of physical injury from slipping or falling, as well as possible damage to the feet, legs and back from prolonged wearing of high heels while at work.”

Charlotte says she’s slipped and fallen at work. “It’s been nothing serious, just a few bruises. It’s quite common for a server, especially wearing heels, to slip or fall at work. You just have to get up and go back to work.”

How to choose the right footwear for work

It upsets me to think that many of these wipe-outs – which can and often do result in injuries so much worse than bruises – could be prevented with proper footwear. A bulletin from WorkSafeBC helps workers and employers make safer choices. Safety Bulletin: Restaurant host, server, or valet states that “Choosing the right footwear and clothing can help keep you comfortable and protect you from slips and falls, burns and scalds, and sprains and strains.”

Charlotte says some servers still say they prefer high heels, but many have opted for other footwear. For example, she’s seen servers wearing all-black running shoes (a.k.a. sneakers). Her own preference? Blundstone boots, because they provide a little ankle support.

Even though some servers are still sticking with heels, it’s refreshing to know that many others have adopted a new culture that prioritizes their safety.

Thanks to Charlotte for telling me her story.