To celebrate NAOSH Week, you can nominate people for awards that recognize safety leadership all year long. It’s a good way to acknowledge and thank them. 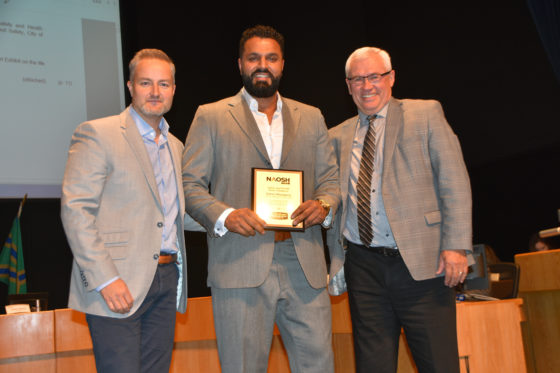 As part of NAOSH Week, it’s time to nominate people who work all year to make safety and health a priority in their workplaces.

Recently I spoke with Bob Nielsen, president of B.C.’s 2019 NAOSH Week Committee and director of corporate compliance at MainRoad Group. I asked what it takes to be recognized as a Safety & Health Champion.

“Champions are people who have follow-through when a safety idea comes forward. They won’t let it go. They’re willing to stand up and represent people who are not willing to speak up for themselves maybe because they’re afraid or shy,” Bob says.

“More than anything, a safety champion is somebody who is willing to listen, bring forward concerns, work with people, and follow through. Safety is something they deeply believe in. They want to make tomorrow better than today.”

The importance of saying thank you

Bob was instrumental in establishing the Safety & Health Champion awards three years ago. He saw it as a good add-on to the traditional awards for activities during NAOSH Week itself. Bob says he’s talked with employers who say they are glad to have this new way of thanking people for dedicating their time and energy to safety throughout the year.

“These awards help businesses celebrate their employees, and the people who have received the awards are just blown away,” Bob says. “It’s hard to imagine that it has taken so little — a nomination and a plaque, official recognition — to make such a great impact. It’s tremendously rewarding for everyone involved.”

You can download the 2019 Safety Champion Nomination Forms online (for individuals or teams) from the NAOSH BC website. The deadline for submitting nominations this year is May 15. Bob says some of B.C.’s health and safety associations have taken on the judging and awarding from within their industries. Those nominations will be forwarded.

Thanks to Bob for telling me about the awards. Thanks also to everyone who takes the time to recognize others for the good they do. I think this is so important, not just during NAOSH Week or in the workplace but also in life, in general.