The annual Cone Zone campaign reminds drivers to slow down, pay attention. This year’s campaign kicks off in May and will run until the end of the summer. 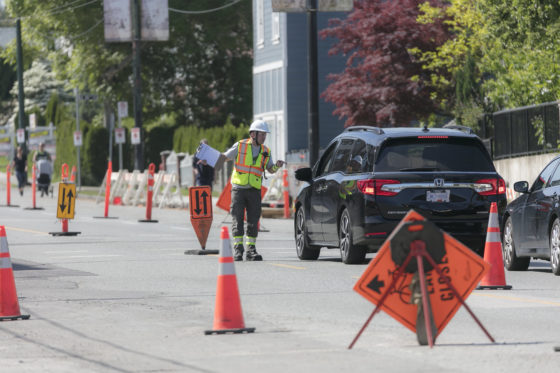 Roadside work is hazardous. Between 2008 and 2017, 12 roadside workers died and 218 were injured as a result of being hit by a motor vehicle.

Every year since 2011, the Work Zone Safety Alliance has reminded drivers to slow down and pay attention in its annual Cone Zone campaign. As part of the 2019 campaign, police officers will be going undercover as roadside workers in active Cone Zones. Throughout the summer, this close-up vantage point will give officers a better chance to spot drivers speeding, breaking distracted driving laws, or not paying attention to signs or traffic control persons.

The campaign also includes an advertising and social media component that will run until the end of August.

Slow down and pay attention

“When we say ‘slow down,’ it doesn’t just mean slow down the vehicle. It also mean slow down what you’re thinking about and pay attention to the road,” says Jacqueline Morrison, an industry specialist for Transportation & Occupational Road Safety at WorkSafeBC.

“Instead of thinking about your next stop, dinner that night, or the 12 errands you’ve got to run, focus your attention on that work zone. Is somebody directing you and giving instructions on what to do? If so, follow those instructions. If there isn’t a person, slow down and obey the signs.”

Jacqueline and the rest of the Road Safety team are also reminding drivers about the “slow down, move over” law. When drivers see red, blue, or amber lights flashing on the highway, it means that if the speed limit is 80 km/h or more, you must drop your speed to 70 km/h or slower. If the speed limit is less than 80 km/h, you must drop to 40 km/h or slower. (For more information on this B.C. law in place since 2015, see my post New laws to protect roadside workers). Also see Working in and around traffic for more resources from WorkSafeBC.