Make sure you can identify toxic plants if you work or play outdoors. Giant hogweed is hard to miss, but poison ivy leaves don’t always look the same. 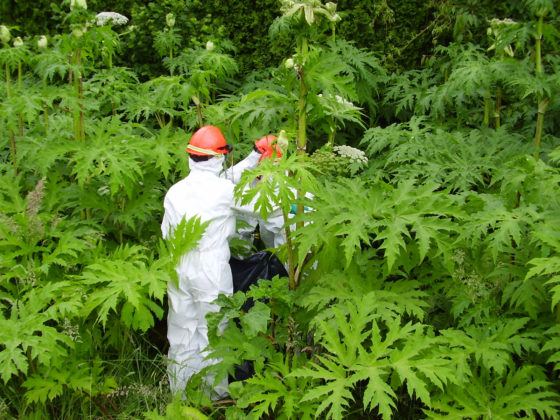 It’s pretty easy to spot a giant hogweed plant. Recently, I read about a Vancouver Island woman who identified two of them in her garden.

Kudos to Duncan’s Dian Tulip, a long-time gardener, for thinking about city workers’ safety when she disposed of these toxic plants, which can cause burns, blisters, and scarring. She didn’t put them into her usual roadside recycling bins that city workers collect. Instead, she took them to the dump herself after she and her husband removed them using protective gear. (Read the full story, Toxic giant hogweed plants show up in Duncan, in the Chemainus Valley Courier.)

Ironically, these toxic plants are actually quite pretty. They have little white flowers, in clusters that form an umbrella shape, and they can grow more than eight feet tall. You can read much more information about the giant hogweed from the Invasive Species Council of B.C.

Some​ of these plant toxins are activated by sunlight. For example, if you get sap from giant hogweed on your skin, get out of the sun until you can wash it off. Do NOT rub your eyes; sap from this plant is known to cause blindness.

All poison ivy is not created equal

Unlike giant hogweed, poison ivy is not so easy to identify. It takes different forms in different environments, and doesn’t always look the same, warns this NPR article: Don’t touch! A scientist’s advice for spotting poison ivy before it ruins your summer.

“Poison ivy plants can grow in many shapes and sizes,” it reads. “When mature vines climb up a tree, their shape can even mimic that of the host tree. Simply pushing aside an innocent-seeming branch could make you pay a few days later when the rash begins to well up.”

Other toxic plants in B.C.

Giant hogweed and poison ivy are only two kinds of toxic plants found in B.C. that can put people at risk. See WorkSafeBC’s Toxic Plants page for more information on others. Also read my post about a landscaper who got some nasty-looking blisters from a euphorbia plant.

All that said, I hope you have a nice time enjoying the outdoors, as summer flies by. Do you have any toxic plant stories to share? I hope you don’t – but if you do, let us know in the Comments below.